Lahore: Inspector General Police Punjab Captain (R) Arif Nawaz Khan said that fool proof security of Chinese professionals working on different projects of CPEC across province is priority of Punjab Police and professionally trained force equipped with latest equipment, Special Protection Unit (SPU) is working hard for it. He further said that in addition to DIG SPU, DPO,s of relevant districts also regularly visiting the sites to review the security arrangements and this force is provided with fast moving vehicles, bullet proof jackets, helmets and other modern equipment so that they can perform their official duties efficiently. He expressed these views during a meeting with Chinese Consul General Mr. Long Dingbin at Central Police Office today. During meeting matters of mutual interest along with security of Chinese citizens were discussed Addl IG Operations Inam Ghani was also present at this occasion.

Chinese Consul General praised the efforts of Punjab Police to ensure the best security arrangements for Chinese citizens visiting Pakistan for CPEC projects and other business opportunities. He further said that Special Protection Unit of Punjab Police is a very dynamic and professional force who is performing the security duty of all the foreigners including Chinese with hard work. During meeting IGP said that if any Chinese facing any problem in any districts of the Punjab local police should be informed immediately and relevant officials and officers should ensure its redressal at earliest on priority basis. At the end of meeting shields were exchanged between the Chinese Consul General and IG Punjab. 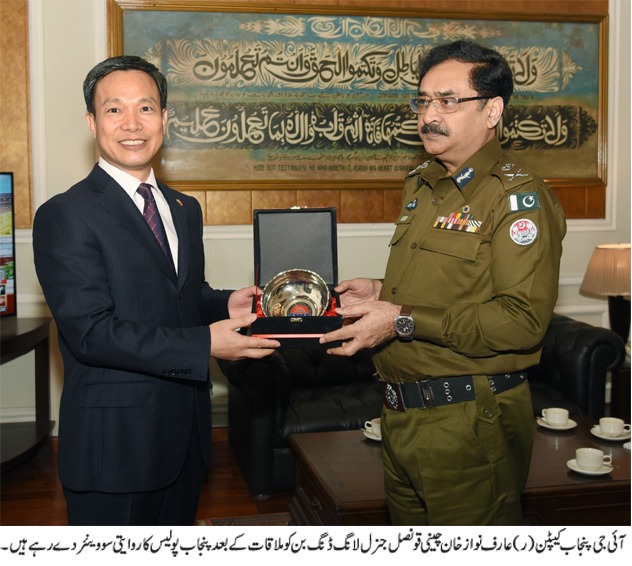