Directions to register FIR immediately upon the complaints of Samina Bibi from Vehari, Aamna Bibi from Lahore and Muhamad Javed

According to the instructions of Inspector General Police Punjab Capt (r) Arif Nawaz Khan mechanism of public complaints redressal and service delivery are being further improved to solve the public issues at earliest so that trust between public and police can be further improved. In this regard, AIG complaints heard the complainants personally at Central Police Office and issued orders for their redressal at the spot. According to the details directions to the field officers on the applications of complainants from Nankana, Sheikhupura, Rawalpindi, Sargodha, Vehari and Lahore and other cities were issued.  AIG issued directions to register FIR immediately upon the complaints of Samina Bibi from Vehari, Aamna Bibi from Lahore and Muhamad Javed and other citizens, a strict departmental and legal action against the police officials responsible for the delay is also being taken, he further added. Also, third time change in investigation request of Chan Sultan resident of Sargodha was forwarded to investigation branch. Directions for immediate action were issued on the application of citizens about registration of FIR and change of investigation.

While talking to the complainants AIG Complaints Ibadat Nisar said that citizens can visit IG office for redressal of their complaints between 9 AM to 4 or can call 8787 for redressal of their complaints and there is no need for any reference or a beforehand appointment. He further said that according to the IG Punjab open door policy complaints from citizens across the province are heard and processed for every possible remedy, the system of public complaints redressal is being further improved through effective monitoring, he further added. 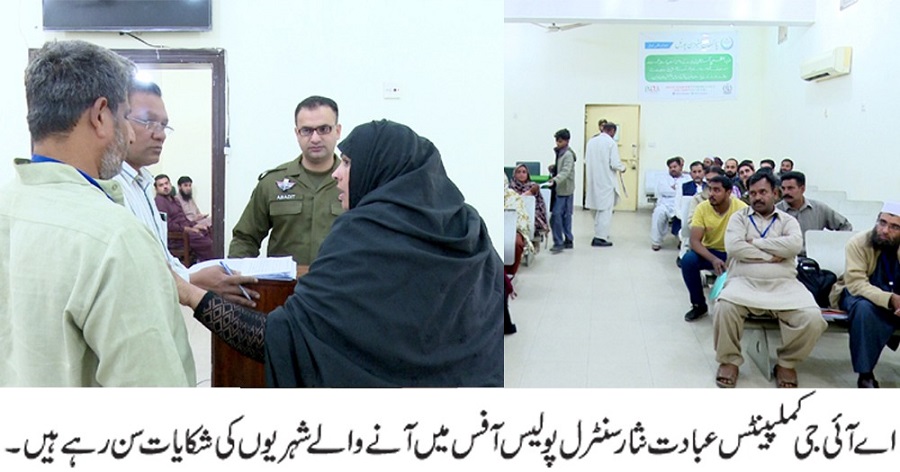