Crackdown on Underage Drivers Under Way

LAHORE - Hundreds of underage drivers were detained by police on Monday as authorities launched Punjab-wide crackdown to discourage the growing trend of motorcycle riding by juveniles.

As part of the latest police campaign against underage drivers , the parents are bound to submit surety bonds with the local police to get back vehicles and children from the police custody. The two-week crackdown , launched on Monday, will continue till November 27. Several special teams involving dozens of traffic officers are taking part in the campaign to check juvenile driving.

The move comes as police observed that “underage driving” was the major reason behind many fatal road accidents reported across the province in recent months. The traffic policemen will not only confiscate the vehicles but the juvenile drivers would also be detained. The violators will only be released once their parents will submit guarantees in writing.

The city traffic police department took action against hundreds of underage drivers on Monday, the first day of the campaign.

“At least 373 juvenile drivers have been detained by police during the first shift of the first day of this campaign. Several special squads are taking part in this campaign,” Lahore’s chief traffic officer Rai Ejaz Ahmad told The Nation.

According to him, the city traffic police decided to launch a grand operation against juvenile drivers since they always cause fatal accidents on the city roads. “This decision was taken to avoid accidents and ensure safe journey for citizens,” the officer said.

“We have noted in our observation that juvenile driving was the major cause behind fatal accidents,” he said.

A police spokesman said that the road safety officers and education units also are directed to arrange awareness lectures in different educational institutions in order to discourage the rising trend of motorcycle driving by juvenile drivers . “We understand that parents can play vital role in this campaign. They should not allow their children drive cars or motorcycles on city roads,” the spokesman added.

The central police office last week ordered the traffic police department to launch a full-fledged clampdown on the juvenile drivers . The regional and district police officers were directed to complete homework before launching a full-scale crackdown across the province.

According to an official letter issued from the Traffic Police Headquarters, “The Inspector General of Police, Punjab, has directed that crackdown against underage drivers be undertaken throughout the province to control rising trend of motorcycle driving by juveniles.”

“During the special campaign, motorcyclists and motorcycle rickshaws shall be checked thoroughly regarding underage drivers . Motorcycles driven by juvenile drivers shall be challaned / impounded and shall only be returned after obtaining surety bond from the guardian/parents that they will not allow the underage to drive the motorcycle again,” the letter warns.

In case of motorcycle-rickshaws, the same shall be impounded and FIR be registered against the owners for renting the rickshaws to an underage/ unlicensed drive.”

Police sources said that the Lahore traffic police department ticked at least 47,000 underage drivers during the first 10 months of this year but juveniles are still seen driving on city roads. Therefore, the department ordered to take strict action against such drivers besides confiscating the vehicles being driven by underage drivers .

A police official said that the traffic officers were also directed to take strict legal action against the unlicensed motorists. The latest campaign is being monitored from the central police office on a daily basis. 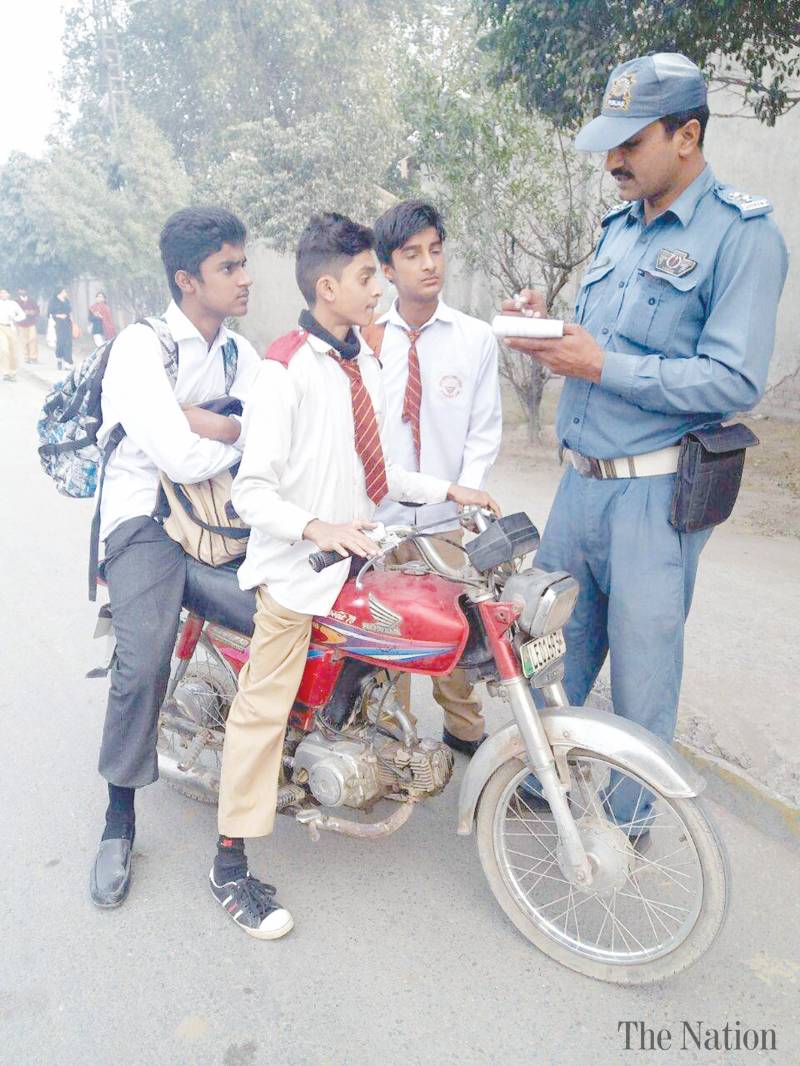