IG Punjab expressed wishes and prayers for a speedy recovery of injured officials besides encouraging them.

Inspector General of Police Punjab captain retired Arif Nawaz Khan said that brave soldiers of Elite Force saved citizens of Lahore by sacrificing their lives in Data Darbar incident upon which all Punjab Police and nation is proud of them. He further said that extraordinary measures are being taken for the provision of the best treatment for injured officials of this incident whereas the process of welfare and care of families of the martyrs will be continued on priority basis. He said that the moral, commitment and determination of Police force against terrorists is unshakeable and personnel of Punjab Police will never get afraid of such incidents and it will lay their lives in future also if needed in order to protect lives and properties of people.

These views were expressed by IGP during his visit to mayo hospital to ask after injured elite police officials. IG enquired the injured elite force officials and expressed prayers and well wishes for their quick recovery. He during his talk with injured officials said that your dutifulness, bravery and determination is an example for rest of the force. He further said that provision of the best treatment of the injured officials until their complete recovery is my personal responsibility and as chief of the police force I myself came to see my brave soldiers. CCPO Lahore BA Nasir, DIG Operations Lahore Ashfaq Ahmad Khan along with other senior officers were present at this occasion.

Furthermore, as per directions of IG Punjab captain retired Arif Nawaz Khan Police flag march was observed in Lahore and all districts of the Punjab in which all police officers and officials took part. These flag march were led by district chiefs and other senior police officers. The motive of this March was to maintain the moral of Police and citizens after the gruesome attack of Data Darbar, Lahore. It was a clear message to the terrorists that Punjab Police is active all the time to protect wealth and lives of people and every constable of Police is determined that protection of people is the real duty and noble deed for them. Terrorists and miscreants should know that they will have to lick the dust all the time.

During the March officers and officials of Punjab Police visited markets and cities whereas all SHOs DSPs, investigation officers and also elite force participated in this March. On the directions of Inspector General of Police Punjab captain retired Arif Nawaz Khan all Punjab Police of the province collectively expressed power and capabilities on the same day to express that the sacrifices of Punjab Police will not lower down the determination of the force. Prior to flag March, a prayer was conducted for higher ranks of the martyrs of the Punjab Police and it was also acknowledged that these sacrifices will never go wasted at any cost and no stone will be left unturned for materializing the dream of peaceful Punjab.

After that, IG Punjab captain retired Arif Nawaz Khan offered the funeral prayer of the fifth Martyr of data darbar incident namely Constable of Elite Force Sadam Hussain and offered Fateh khawani for higher ranks of the martyr. After this the body of Sadam Hussain was taken to his ancestral city Kasur for his burial with official protocol. 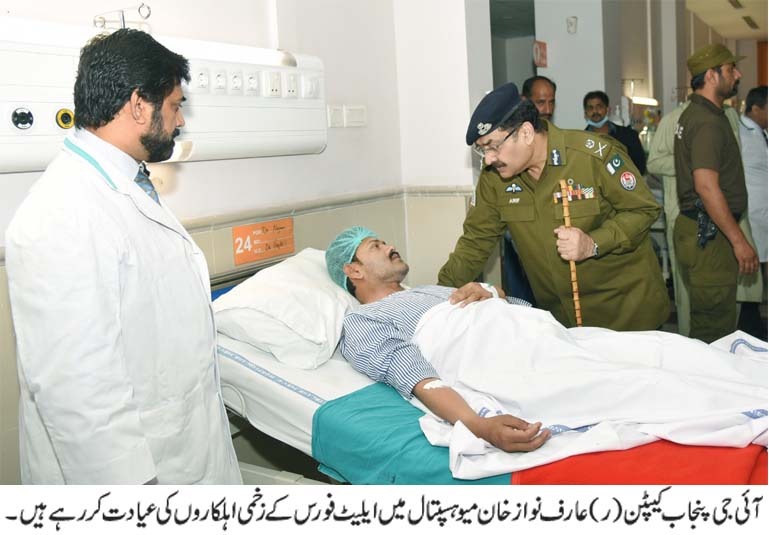